The City of Munich adopts phpList

It’s more than 10 years since the city of Munich in Germany voted to use Free Software. Their ambitious plans to move from Microsoft Windows to Gnu/Linux based Ubuntu are now complete [1]. Yet the technological needs of the city continue to grow and Munich’s quest for reliable innovative Open Source software continues. A recent addition to their toolkit was phpList.

PhpList is an Open Source one-to-many email application (sometimes called a massmailer or bulkmailer). It’s used for sending newsletters or web-pages to thousands of people via email. After successful pilot tests, Munich decided to adopt phpList for their city-wide employment vacancies mailing list.

“It is great to see Open Source Massmailer software like phpList being adopted in this way,” said Michiel Dethmers, CEO of phpList Ltd.

“There are too many tech savvy governments, businesses and charities who insist on Open Source software such as WordPress and Drupal for their website, but are still using a proprietary massmailer to communicate with their customers.” 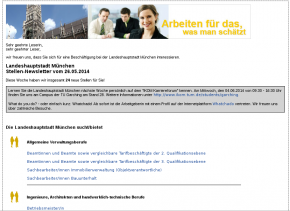 An example of Munich’s newsletter

There are more than 30,000 people working for the city of Munich, which makes the “new employment vacancies” newsletter important to the city’s ability to function. phpList complies with the city’s stringent Open Source and security requirements, and also provides great customer service through its Open Source development model.

“Users of Open Source products can easily get in touch with the developers, pose questions, propose features and even help fix bugs,” said Peter Onderscheka, Munich business unit manager for IT strategy and IT security. “The developers usually respond immediately.” [2]

The switch to Open Source is estimated to have saved the city of Munich more than 10 million Euros. However, their decision to switch was never just about the money, “our main goal was to become independent,” said Peter Hofmann, the project lead. [3] 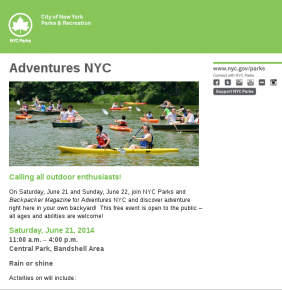 Munich’s employment newsletter is not the only government level project using phpList. Other notable examples include The NYC Parks Department, which manages 22 lists [4]; The State of New Hampshire, which has several departmental newsletters, including the Department of Revenue Administration with 6 lists [5], and the New Zealand Biosecurity Department of the Ministry for Primary Industries, which  run 19 lists on the system [6].

“It is clear that both phpList and the Open Source method are providing the quality of software that governments need,” said Michiel Dethmers “We look forward to seeing more successful iimplementations of phpList in the future.”