Processing the Queue via PHP-CGI cURL

Following a bug report by a phpList community member (nymisoa) we have released a minor bugfix version. Nymisoa described using a cron by loading the processqueue page from a remote location. However, this method stopped working in version 3.0.7 because of the extra XSRF protection we had added.  The majority of phpList installations are unaffected. 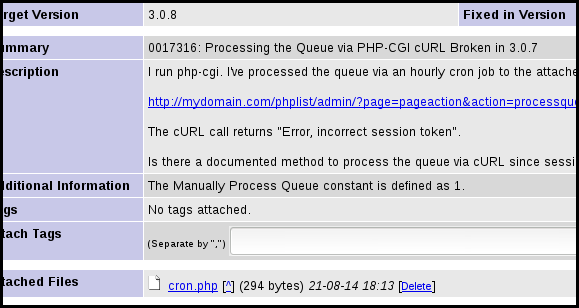 Following a collaborative effort between five members of the phpList community, two solutions were agreed upon. In the short term we have removed the XSRF protection on the processqueue page in version 3.0.8. In the longer term, we will work towards a more secure method to process the queue using a remote call. This will be released as a new feature in version 3.1.0. The same applies to bounce processing.

While this specific method of using a cron with phpList was not intended or envisaged by the phpList developers, this is a good example of how a well written bug report and some team spirit can result in improvements to phpList for many to enjoy.  So thanks to nymisoa, duncanc, deajan and anna for their help on this issue, and thanks to michiel for the two solutions.

Three ways to save a campaign

After requests from users, we have added an additional save button to the campaign creation tab: Save and continue editing. This allows a draft campaign to be saved without returning to the draft campaigns list.

Additionally, the campaign is always saved when you click the NEXT or PREVIOUS buttons or change tabs within the campaign workflow.

So, you have three simple ways to save your campaign.

Following changes to the session length in 3.0.7, we have extended the session token on the editing window to be permanent. This way you can take as long as you need when editing your campaign.

Following a bug report from Anna, the community manager, Mariez  added some tabs on the list of campaigns page. This replaces the old drop-down menu and should make for a more efficient page load for those with a slow internet connection or high latency.

Our new development processes are really coming into their own now, with a more empowered development community and an increase of commits on github.

This feature request for custom placeholders in system messages, for example, had been kicking around since 2005 – but now, a little kindly attention from Duncan and one pull request later, the feature is released! 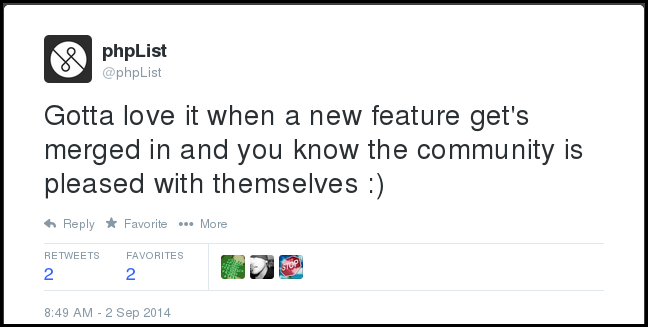 So, thanks to Mansi and Trance meeting who asked in the forums, Yan, h2b2 and rjc who discussed the issue on mantis, Duncan who coded the fix and to Michiel who released it: you can now use placeholders in system emails.  Thanks for being part of the phpList community folks!