A new year, a new release – bugs fixed and new features to try. Welcome to phpList 3.0.11! Mostly this is a bug fix and security release, however, we have released remote queue processing in beta for the adventurous to help test. Export subscribers fix Some (but not all) users were having problems exporting subscribers…. [+]

We have released a new version of phpList, 3.0.10, to resolve two minor issues that were introduced in 3.0.9, which was released last week. 1. The subscribe page data was “escaped”, causing it not to display correctly. In version 3.0.9, when saving a subscribe page, the data had various slash (/) characters in the HTML code…. [+]

We have been really rockin’ the code of late! Another batch of issues fixed and it’s time for another release, phpList 3.0.9 – all of the issues fixed Preventing and repairing mishaps A big theme of this new version is preventing problems during the subscriber import process. In phpList 3.0.9, users will: No longer be… [+] 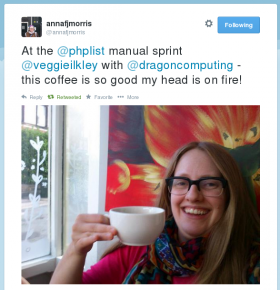 Our first documentation writing sprint was a big success: we had a great time and got a lot of work done… the perfect combination! What we did The sprint started at 8am GMT on the Friday the 10th, when people started to gather in the IRC. Anna, the phpList Community manager, was the first to… [+] 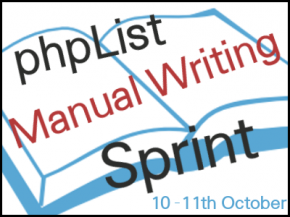 Join in the fun On the 10th and 11th of October we will be having a manual writing sprint. A bunch of phpList users, developers and translators will get together, online and/or in person, to work on the new phpList manual. Sprint Details… Where: the phpList IRC on freenode What?! Not sure what that is?… [+] 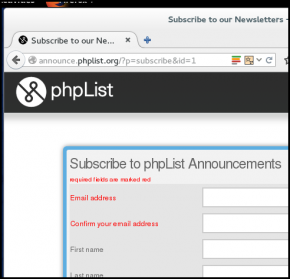 We have added an exciting new feature to our phpList Hosted service: you can now use your own domain. Using your own domain for your phpList newsletter has many benefits, for example your phpList subscribe pages and emails will look more professional and trustworthy. This option is available if you have a PLUS account.

The phpList team is pleased to announce a new version of phpList, 3.0.7. This release is a minor update. We have added some more security defences, and updated the interface in a few places. Visit the changelog page to view a more detailed list of changes. Favourite Feature Back by popular demand is the option… [+]

If you Google phpList, you’ll see some great reviews… from 2012. It’s not that we’re ungrateful — really — we’re not. It’s just that since 2012 so much has happened! We launched phpList 3, which included major changes (and excluded the orange interface!) The hosted service has taken off, to the extent that… …in 2013… [+]